The Greek mythology ーa child being sacrificed every month to calm the “Teumesessian fox” that eats peopleー is where the title “Teumesessian Sacrifices” derives from.

Is there any reward for the “Sacrifices”? If so, what will they pay off?

Ⅰ. The Sacrifice of the “Lambs”

“Macroeconomics was invented so people wouldn't have to look their sacrifices in the eye.But I'm different. I can sacrifice anyone whenever I want.”(Sasagawa)

“Macroeconomics” is a branch of economics that considers the structure, behavior, and performance of an economy as a whole.

In the macroeconomics, individual interests are less valued.

Yonehara and Sasagawa had this macroeconomic thought in their background.

They tried to recreate the Subprime Mortgage Crisis and burden money to immigrants and socially vulnerable people, which are the “Lambs.”

They ignored the weak and ran the economy from a macroscopic point of view and earned money like the clever “fox.”

That’s how they “Sacrificed” the “Lambs.”

ⅱ. The “Sacrifices” of Yonehara and Rick Fellows

In fact, Yonehara was also sacrificed by Sasagawa.

Sasagawa planned to dispose of Yonehara, whose Hue is becoming cloudy, into a slum area to seal the secret of their wrongdoing and jumped to “Dejima” by himself.

Thanks to the “Sacrifice” of Rick Fellows, the plan was blocked by the Public Security Bureau and the Ministry of Foreign Affairs―which Kogami and Ginoza belong!―

However, this entire case is just a “Sacrifice” of a bigger mastermind.

Ⅰ. A sacrifice of Bifrost

Shirogane : So, inspector has fallen into the hands of the Operations Department. I'm impressed that Shizuka predicted it.

Saionji : You mean that this is Roundrobin's will and essential to Bifrost's security?

Homura :  The collapse of the subprime diagram and Operations'trap were self-evident.That's all.

Shirogane : A sacrifice was necessary to spring the trap and reset the diagram.

Saionji : All is for Bifrost. Sacrificing an inspector is a small price. Well done.

In the previous story, Sasagawa was called an “7th Inspector Sasagawa”

So, “Inspector” that became “A sacrifice” is Sasagawa.

The point is what Bifrost will do by sacrificing Sasagawa.

Their conversation is too abstract to see the whole story, but there are a few things that can be inferred from their discussion.

I take account of these suggestion and following facts,

I tried to make the hypothesis as a kind of starting point.

The hypothesis is that <Bifrost> is a kind of special area like “Dejima.”

“Dejima” was the artificial island that existed in the Edo period to prevent foreign people from going into Japan, which was a “closed country(Sakoku).”

In my hypothesis, <Bifrost> is like “Dejima,” where is out of control from the Sibyl System.

At first, I thought that “Dejima” was just a figurative remark and that there was no deep meaning, but one of the themes of “3” was collapse of “Sakoku(closed country)” policy and accepting immigrants ―which is related to “Dejima” that existed during “closing the country”― and when you think of <Bifrost> = “Dejima”, there are many things that can be explained..

There are the following reasons for considering <Bifrost> = “Dejima”.

I will explain concretely below.

In North mythology, “Bifrost” is a rainbow bridge which connects the kingdom of God and the world of humanity.
When you think that “Dejima” plays a role of connecting between Japan and overseas, you can convince that “Dejima” and “Bifrost” are similar in that they link two realms.
There should be a reason to name it, so if “Dejima” = <Bifrost>, it seems that I can be convinced about the name.

② "Opening the country" can be carried out more smoothly

Imagine that Japan “opens the country” in the world of “PSYCHO-PASS”, you can guess that there will be many problems.

For example, if immigrants of different cultures and different laws flow into Japan,  the Sibula system will have to judge people with a slightly different standard of judgment.

The quickest way to solve this problem is to incorporate foreign “Criminally Asymptomatic (免罪体質 Menzai Taishitsu)” people into the Sibyl. Then, the Sibyl can make judgments in a much wider range.

So how can you easily incorporate foreign “Criminally Asymptomatic” people?

There is a way to open the whole country and incorporate it from all over Japan. But then it will confuse taking “Criminally Asymptomatic” people, so it’s not an efficient way.

If they do so, they can take “Criminally Asymptomatic” in a narrower range, and they can explain that it is an experiment accompanying the “opening of the country.”

In short, it means that the experiment at Shambhala Float reproduces in Japan.

If they do this, they can experiment with introducing Sibyl throughout Japan, while incorporating foreign “Criminally Asymptomatic.”

So, it’ worth creating “Dejima.”

③ Meaning of the words of the congressmen

And I think “Dejima” has finally escaped from the hands of the Sibyl s System and has become a “special zone” that is not under the control of Sibyl.

And the part of the Sibyl System that resisted the mainland might be called “Roundrobin.”

In that sense, the meaning of the words “Roundrobin will take enforcement action” and “To prevent Sibyl’s interference and protect Bifrost’s interests is our duty” is also passed.

In other words, because “Roundrobin” was part of the Sibyl System, it can “take enforcement action.”

And the reason they “prevent Sibyl’s interference” can be explained that to prevent people living in the independent “Dejima” = <Bifrost> from the Sibil System in the mainland.

The above is just speculation, but it is also in line with the theme of “3”―“Opening of the country”― and when I think about it, I fell convinced the existence of Bifrost.

And I think that the most significant “sacrifice” paid for the theme of “3” ―“opening of the country”― is Akane Tsunemori.

In the middle of the 2nd episode, a clue of “that incident” was displayed on the monitor.

Making text within the readable range, it will be as follows. 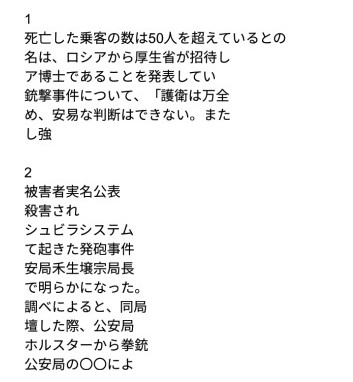 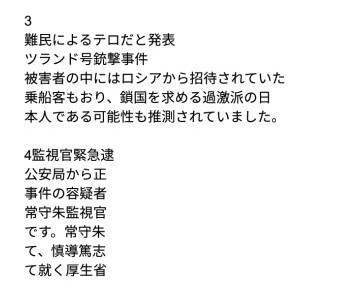 Since the information in the article is too fragmented to be translated, I would like to write a summary including guesses.

The two events themselves are still speculations, and they may be a single incident that occurred at the same time.

I still don't know the details, but I thought it would be more fun to guess and look at the story, so I made another hypothesis.

Hypothesis 2: Akane Tsunemori was sacrificed for the Sibyl System

There are several stages, so I will explain them accordingly.

I thought that Arata couldn’t become his Hue cloudy even after a mental trace because he is Criminally Asymptomatic.

And genetically, it is speculated that Atsushi is also Criminally Asymptomatic.

② Atsushi tried to reveal the secret of the Sibyl System

And he tried made to happen “that incident.”

Atsushi became only the brain, so he borrowed the Bureau Chief’s figure and tried to reveal Sibyl’s secret.

So Tsunemori prevented the execution of Atsushi’s plan.

But to do that, she had to kill Atsushi, who borrowed the Bureau Chief’s figure.

Of course, all the above is only speculation, but if you think that way, it seems to make sense.

Kei : Achain of malfunctions. Like the transport drone crash.

The victim of the new episode in Episode 2 was Tsuchiya Kojo, who was the mental care staff of Karina Komiya, a former idol and now running for election.

Guess from the above, and the story went like this :

If you simply guess, Kousuke Hercules Yakushiji, an opposition candidate for Komiya Karina, seems to have sent a “Bodyguards” to reduce her reputation and set up an incident.

However, leaving a footprint is carelessness. And Considering Arata’s remarks that Karina Komiya would be formidable if she was a criminal, the incident may not be so simple.

And taking account of the similar tricks―Achain of malfunctions―, it seems that the case is backed up by the “Inspector.”

ⅱ. What are “Inspectors” trying to do?

The question that remains, after all, seems to be what the “Inspectors” are trying to do.

To think about their scheme, let’s consider what happens if their “diagram” is successful.

For example, what happens in the case of a subprime loan in 1st episode?

If Sasakawa’s plan is successful, the collapse of the bubble should eventually go to the socially vulnerable or immigrants who bought the house.

If this happens, immigrants would not be able to live in Japan and go abroad, or people’s Hue would be cloudy and be caught.

If so, does the “Inspector” aim to eliminate immigrants or socially vulnerable people ...?

If there is an inspector behind Kina Karina or Yakushiji, there may be clues to the Election.

I want to wait for clues about this.

Ⅵ. Will Teumesessian Sacrifices be rewarded?

There was not so much information in Episode 2, so I made hypotheses about the contents of “3”.

Of course, it is just hypothesis so that it may be entirely out of focus. But I think that this kind of consideration is one way to have fun original animation, so I’m having fun to make hypotheses. And also(and that is more important)people who read this think about something, I hope you enjoyed PSYCHO-PASS more.

Thank you for reading! See you next time!